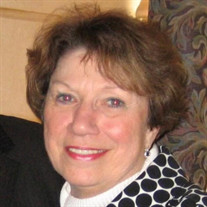 Ann Marie Gilleran, age 83, of East China, MI passed away peacefully on Wednesday, January 5th, 2022. She was born January 10th, 1938, to the late Norbert and Cecilia Rinke. Ann grew up in Centerline, Michigan and later Grosse Pointe. She graduated from Dominican High School (1956) and then attended University of Detroit. After marrying the late Jim Gilleran in 1962, she dedicated her life to raising her three children, Mike, Michele, and Renee. The family moved to Saint Clair in 1979, as Ann loved the water and truly enjoyed the peacefulness of the Saint Clair River. Family was everything to Ann, and she took great pride in making memories with her children and grandchildren. Ann is survived by her son Michael (Mickie) Gilleran, daughter Michele (Scott) Porterfield, daughter Renee (Steve) Zacharias, grandchildren TJ (Samantha) Gilleran, Allyce (Dennis) Colpitts, Ryan Gilleran (Michelle Litton), Alex Porterfield, Erica Porterfield, Nolan Zacharias, and her great grandchildren Luca and Cameron Colpitts and soon to come third greatgrandchild. She is also survived by her brother Joseph Rinke of Saint Clair and many nieces and nephews. She is preceded in death by her parents Norbert and Cecilia (Buechel) Rinke, brothers Roland (Janice), Roger (Dee), Richard (Marilee), and sister Doris (John Potvin). We wish to offer a very heartfelt thank you to Mary Black, Shauna Bryant, and all of the staff at Scotland Manor who were so dedicated and loving in Ann’s final chapter of life. Also, thank you to the care team at McLaren Hospice, and Jill Mahaffy, for their support in caring for Ann. A Memorial and Celebration of Life will be held at a future date. Arrangements by Young Funeral Home, China Twp. In lieu of flowers, donations can be made to either The Capuchin Soup Kitchen (Detroit, Michigan) or Kids in Distress (Saint Clair, Michigan). To leave a message of comfort visit www.youngcolonial.com

The family of Ann Marie Gilleran created this Life Tributes page to make it easy to share your memories.

Send flowers to the Gilleran family.