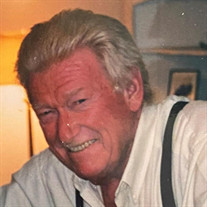 Alan “Al” G. Zimmer, age 76, of St. Clair, passed away peacefully surrounded by family on June 22, 2021. He was born on January 27, 1945 in St. Clair to the late George and Monica (Simons) Zimmer. He graduated from St. Clair High School, married his high school sweetheart Nancy (Bezenah) Zimmer on August 13, 1966 in St. Clair, he then was drafted into the Army in 1966 and made their way to Huntsville, Alabama for boot camp and his specialty training, after being deployed Al spent his remaining time serving his country in Karlsruhe, Germany. Al was a master mason by trade and started his own company “Zimmer’s Equipment” upon returning home from Germany. He had the gift of being able to fix or build anything, even his own racecar where he would race at the Detroit Raceway. Al was also passionate about flying and had his pilot’s license. Boating was also a love of his, which he has passed onto his daughters and grandsons. He was an active member of the Eagles Club, American Legion, VFW and the Shriners and often cooked for all of their special events. After retiring for the past 20 years Al enjoyed and looked forward to his winter months in St. Petersburg, Florida. Where he made countless friends, which became his extended family. He enjoyed golfing, eating raw oysters from his friend Buzz and his daily visits to the club. He is survived by Nancy (Bezenah) Zimmer; daughters, Jody L. Zimmer of St. Clair and Melissa (Loren) Brooks of Joliet, Il; grandsons, Hunter A. and Tanner H. Brooks of Joliet, Il; brother Stephen (Rosemary) Zimmer or St. Clair; along with several nieces and nephews. Al is preceded in death by his son Jeffery A. Zimmer of St. Clair. A private interment and graveside service will take place at a later date. In lieu of flowers memorials may be made to The Wounded Warriors Project at www.woundedwarriorproject.org the family would like to thank Compassionate Care Hospice for the wonderful care al received. To leave a message of comfort visit www.youngcolonial.com

The family of Alan "Al' G. Zimmer created this Life Tributes page to make it easy to share your memories.

Send flowers to the Zimmer family.